With any of my conversions, I love getting into the theme and backstory of the miniatures. In the case of this project Anvil Industry miniatures were perfect for my unique designs.

The Menschenjäger, or Man Hunters, are a specialised squad, unleashed to hunt down and eliminate enemy high command. I wanted them to be a dishonourable, twisted terror squad that revels in slaughter!

I took inspiration from the Gaunt's Ghosts novels and design cues from the German uniforms of the Great War. I was also influenced by the Stahlhelm and the MG42 machine gun - iconic fixtures of the Second World War.

The squad could be used in a myriad of game systems, such as Kill Team, Weird World War, or an infantry army.

I have split the following breakdown of my conversions into 5 stages.

I always like to start with creating thematic bases that will frame the models and represent the world that the characters are inhabiting. For this project, a decaying trench-laden landscape, filled with sandbags, barricades and barbed wire. Anvil Runners also provided wooden planks, tree stumps and brick walls, which work perfectly, along with some miscellaneous tools. 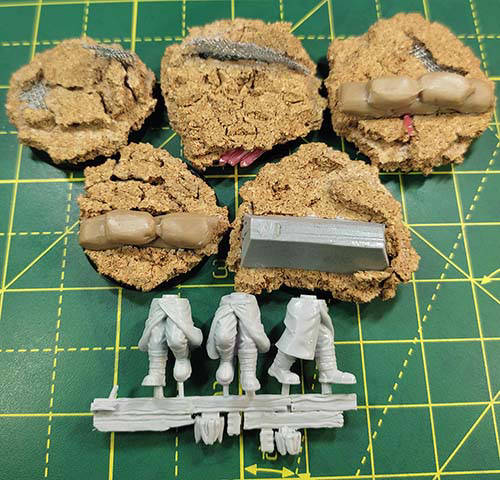 Choosing a pose for each miniature is always tricky, but Anvil offers a great variety of options and modular parts that add a dynamic character to each unit. I envisioned them fighting through intricate trench systems and bunker complexes, so the Long Greatcoat legs were a must, as each gives a different sense of movement. Such as squad members charging into the breach. I chose a set of bionic legs for the squad leader to show his veteran status. To represent that the squad receives the most hardy equipment I chose Iron-clad looking torsos, housing re-breathers on their backs, for any hazardous conditions. 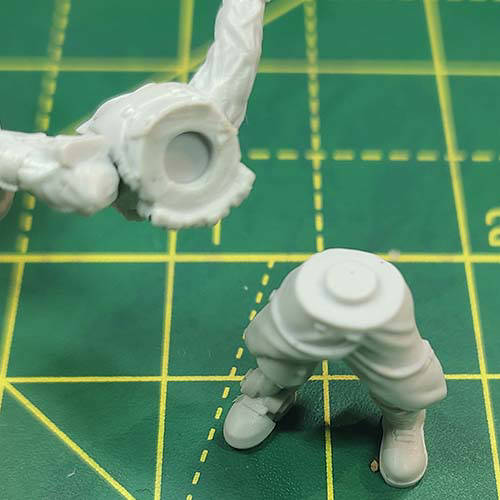 I wanted each member of the squad to be armed differently. Anvil's mixed male fatigue arms gave me a great selection of arm poses to achieve this goal. For example, the leader of the squad is beckoning his men onwards holding his weapons aloft. One member reloads his grenade launcher after firing off some rounds, another gets ready to throw a grenade while brandishing a trench mace. Each member of the squad carries a machine gun on their back if they are not wielding it. Finally, I decided on armoured shoulder pads which fitted neatly, no matter the arm pose, I had the miniatures in. 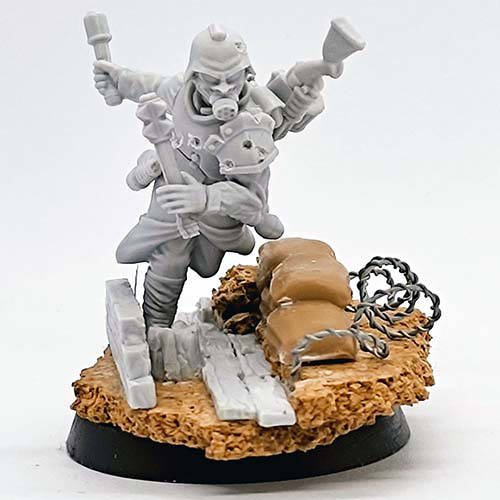 I love imbuing every unit with character. For my audience, it is essential the story matches the visuals. Anvil's grotesque-facemasks-with-helmets were perfect for this end, depicting snarling and loathing expressions. Twisted smiles that represent the diabolical souls of those who wear them.

Hence, when assembling their heads, each matched the personality I envisioned for them. A peaked cap head to designate the officer (Varan), an aggressive pig-like mask for the grenade launcher specialist, charging forwards. A gasmask head for the grenadier (safety first haha). A grinning maw for the MG42 bearing squad member you can imagine cackling as he levels his weapon. Finally, a goggle wearing mask head to keep your vision clear for remote controlling a gun on tracks.

Anvil offers an abundance of accessories. For example I placed knives on the squad leader and a machete from the Trench Melee Equipment on the gunner, spare grenades on the grenadier, and used different Entrenching Tools to reinforce the aesthetic of every model. One of my favourite accessories is the cybernetic dog I placed on the base of Varan (who doesn’t want a faithful hound?). Finally, the last model was made from the small tracked platform, with the classic twin HMG replacing the vanilla option (after all, who doesn't want more DAKKA?!).

For the finishing touches, I cut grooves and chips, as well as making holes with a drill into the helmets and shoulder pads of the miniatures to show the riggers of battle they had been through. 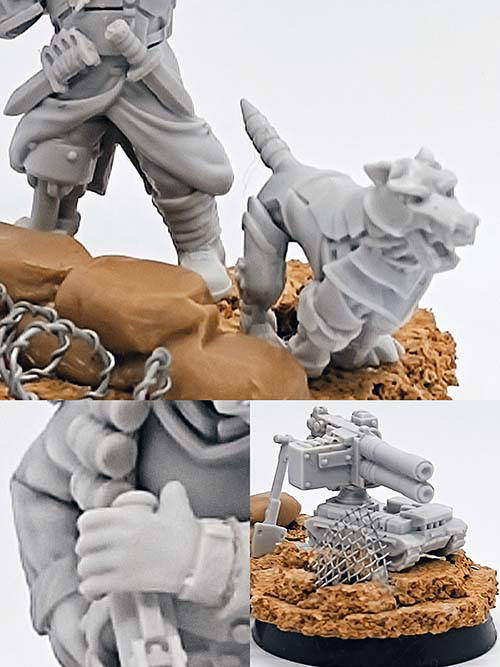 A fantastic-looking squad with some awesome conversions. If you’ve been inspired by Krieghobby, check out his Instagram https://www.instagram.com/krieghobby/

Drop us a line with your own conversions, we’d love to see what you’ve been up to!