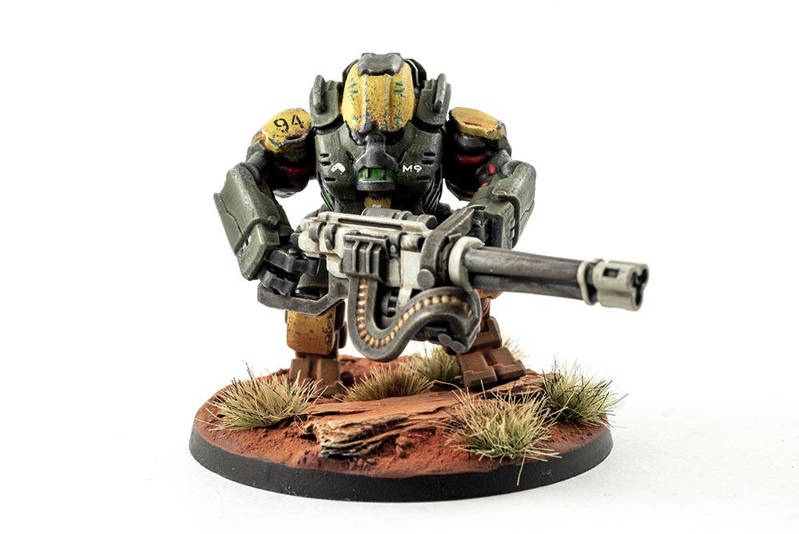 Anvil staffer Adam's models always look great, and this one is no exception- although it does to be fair look pretty exceptional!

The OGRE Modular Infantry Support Mechs Pack was released as part of our Patreon and is also available through the Digital Forge here.

So, we fired up the 3d printer and let Adam have a play with this gorgeous mini. 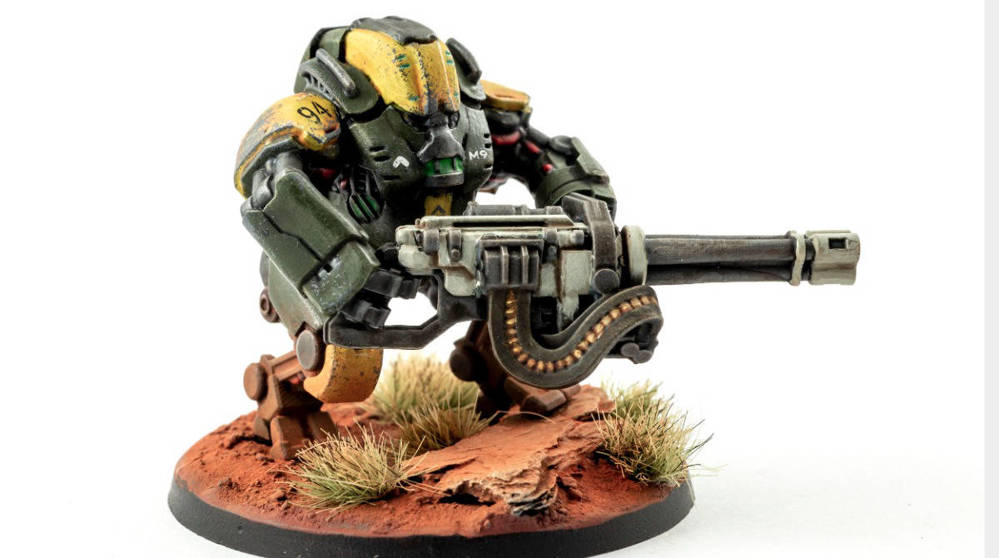 I was really excited to finally get the chance to paint one of these. I'm a big fan of realistic sci-fi (if that isn't a contradiction in terms!) and love the solid, clunky feel of the model. You can almost hear the gears grinding as this thing strides across the battlefield, laying down a hail of bullets!

The STL files give you a couple of options, including the legs, the weapon, and the pilot. So I had a cup of tea and think about what I wanted to do with the model. 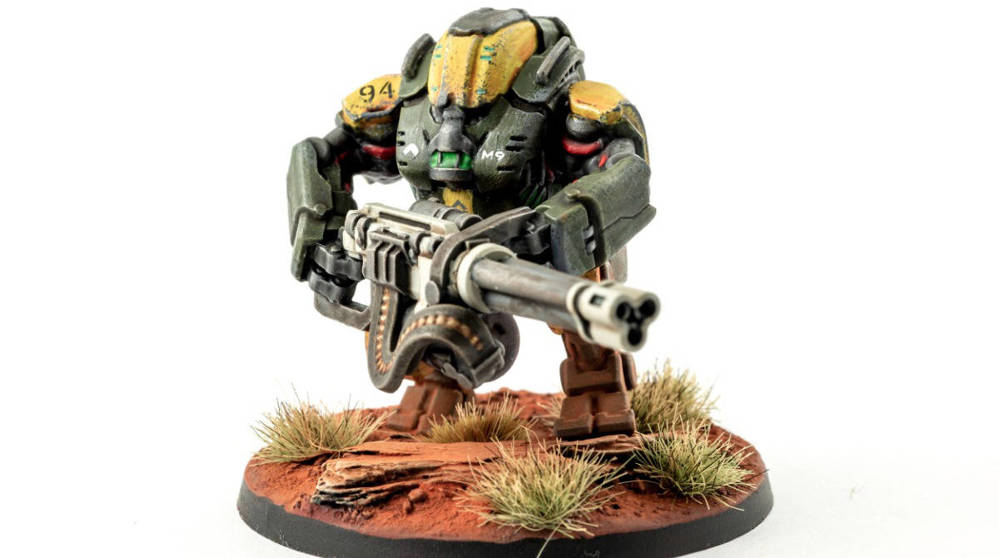 I decided to go for a machine gun over the gauss cannon, basically because I wanted something a bit more brutal! Plus, I really wanted to paint up the ammo belt. I was tempted to make the model look like it was striding/running, but I settled on a stationary pose. The story I had in my head was that this Battle Suit was acting as a vanguard, advancing into dangerous territory and seeing if it was safe. Which is why I went for an enclosed pilot- who knows what the atmosphere is like on this hostile planet! 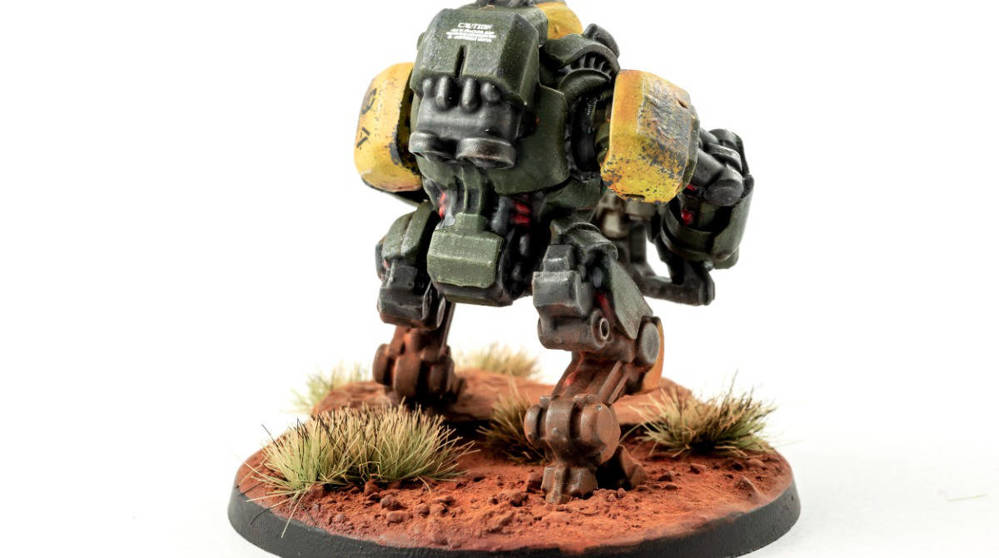 I love weathering models- and this was the perfect excuse. There is a fine line between 'field use' and 'run down piece of junk' and I hope I've achieved the latter! On the legs, I used red pigment powder that matched the base. The idea was that this thing has been walking miles through dusty plains under the beating sun. For the paint chips on the shoulders, I took a washing-up sponge and tore the edge, using to gently dab on some bright silver, which I also used for edge highlights where the elements would have worn the paint away. 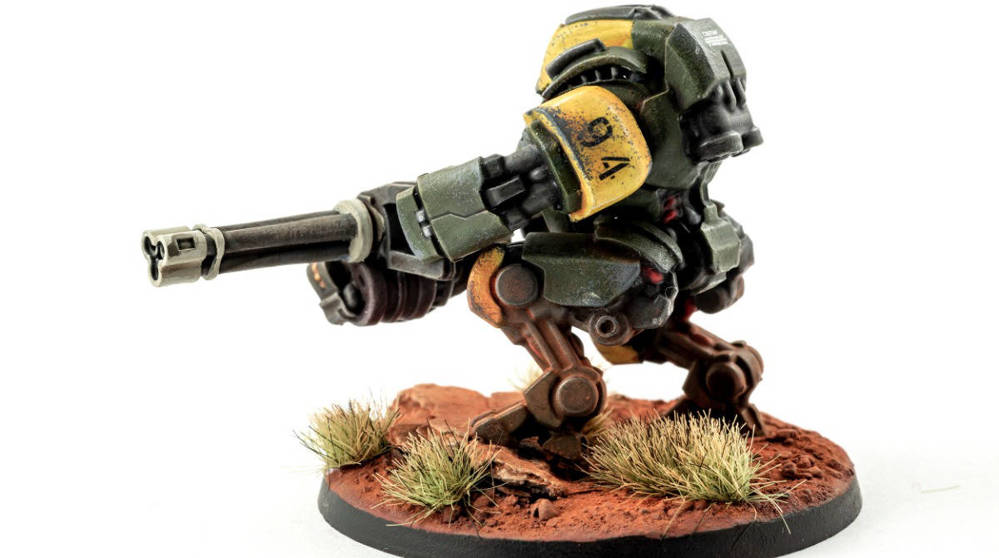 I went for a muted colour palette when painting up the OGRE. This machine is a solid, military workhorse- not some fancy parade ornament!
The drab green that I used helped to get this across, and by going for such a subdued colour, it made the bright glowing green on the front and the red wiring really pop. 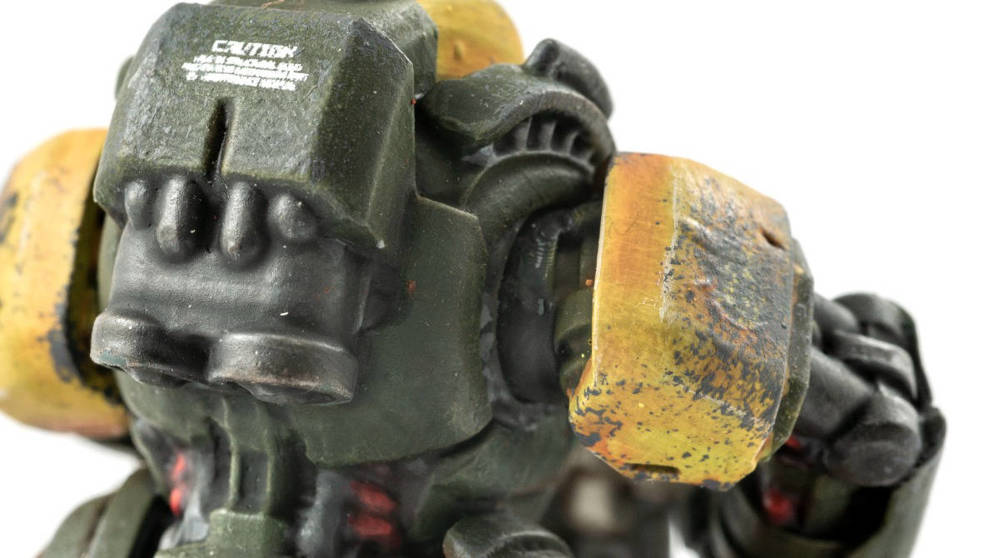 I have to admit- I used a transfer for the writing on the back! But seeing how I haven't had my eyeballs replaced with cybernetics (yet....) I don't feel too guilty- and neither should you! Things like stenciled writing are an absolute faff, so don't be worried about "cheating" and using a transfer or two. 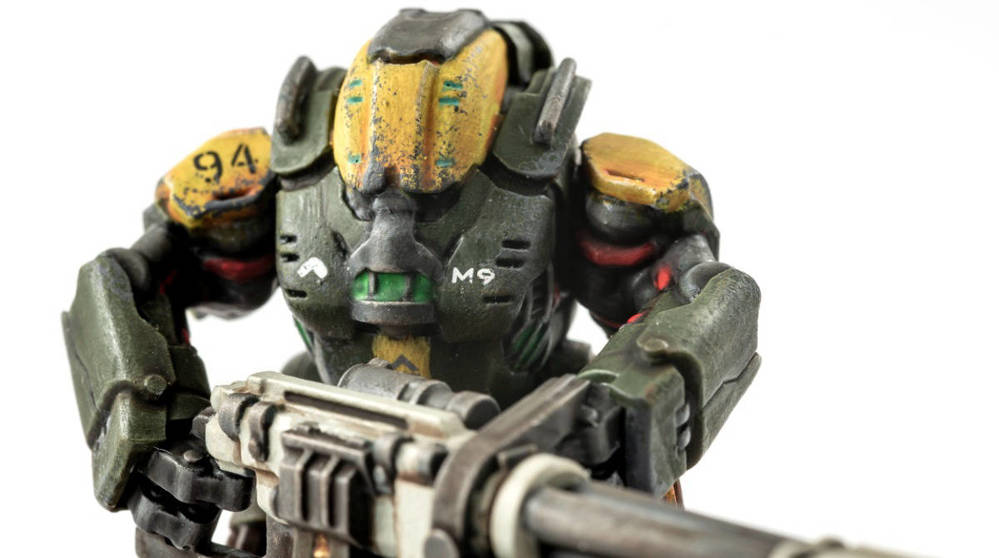 Thanks for sharing that Adam- a great-looking model and it just goes to show that you don't need to throw half a pot of ink and a load of SPX paint at something to get great weathering. Sometimes, less really is more.

Do you like Adam's OGRE Battle Suit? Let us know what you think in the comments and if there is something you'd really like to see us write about on the Anvil Blog we'd love to hear from you.

And as a special reward, for reading until the end of the article, I can tell you that this model will also be released in Resin later this year!