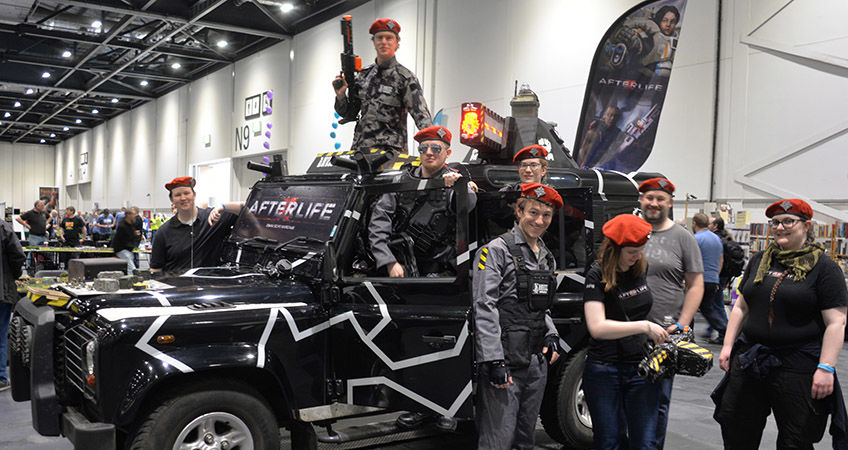 To say months of preparation goes into preparing for Salute, one of the biggest wargaming shows in the UK, would be an understatement. This year was no exception, what had started as a bit of a joke developed into a mad plan to have a demo game in the back of a sci-fi Land Rover Defender!

After getting permission from South London Warlords (the awesome club which organises SALUTE every year) we cherry picked a Defender that looked tough enough for the job and set about planning our biggest ever conversion!

After we realised it would be impractical to have people climb inside, we set up two demo games, one on the front bonnet and the main game just inside the rear door.

For the terrain, we wanted something with an immediate impact, but not overly complicated to build and play on, the mission was to showcase the miniatures and gameplay after all. So we turned to the Laser Terrain Co. and their laser cut acrylic light up modular terrain kits.

We built a light box with 6 meters of colour changing LED’s, and mounted the Laser Terrain on top with some basic desert scenery to fill gaps. The result is a high tech but remote medical/military installation, perfect for the world of Afterlife!

A custom designed and 3d printed med bay completed the look, some suitable paintwork applied and you could believe ‘the Technician’ had recently been carrying out his gruesome experiments… 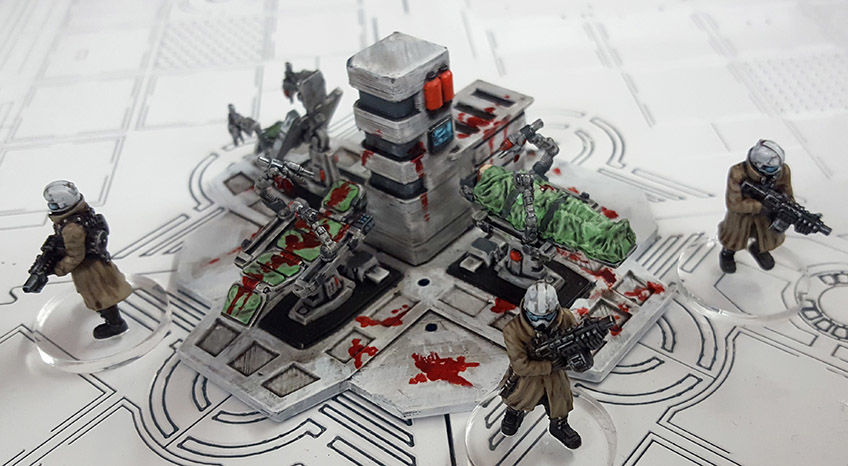 With the board looking sweet and the vehicle getting a unique distraction camo pattern, it would have been a shame not dress up. We got hold of some army surplus red berets and 3d printed Republic faction logo badges to attach to them. Grey boiler suits in conjunction with tactical vests and custom patches gave us a working military look. Next year we want to do full Republic commando body armour! 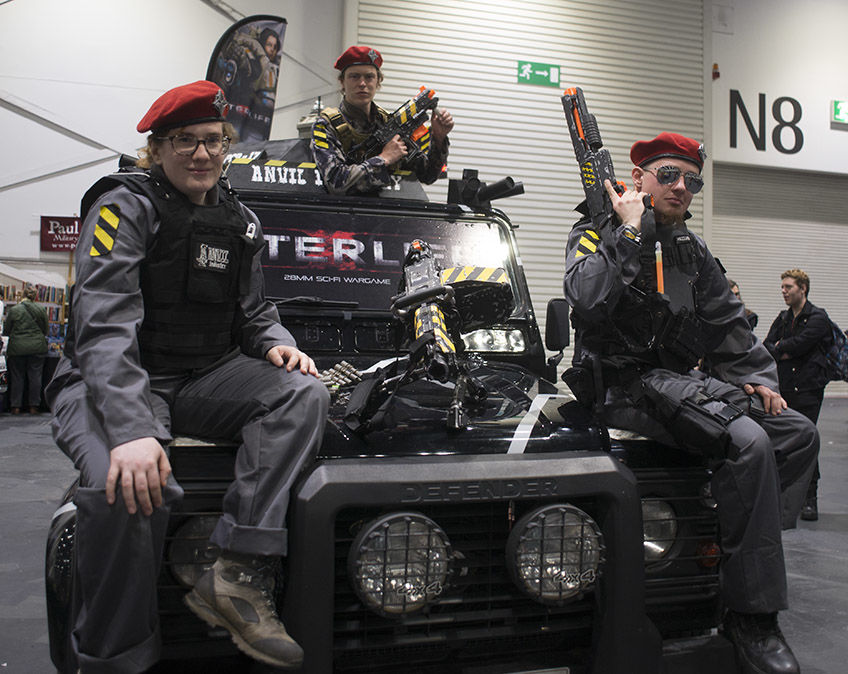 As we had a couple of Nerf guns lying about the studio we tasked Adam with spraying them up with a more realistic paint job. He started with a coat of hammered effect silver, then applied toothpaste along the edges, and sprayed Krylon matt black over the top. Scrubbing the toothpaste off reveals a very realistic chipped and weathered effect.

A couple of props were needed on the Defender to complete the look, so Joel made some smoke launchers out of cardboard tube, and a large rail gun turret for the roof. This was crafted from weapons grade polystyrene packaging and cardboard, and had red LED’s lining the barrel. 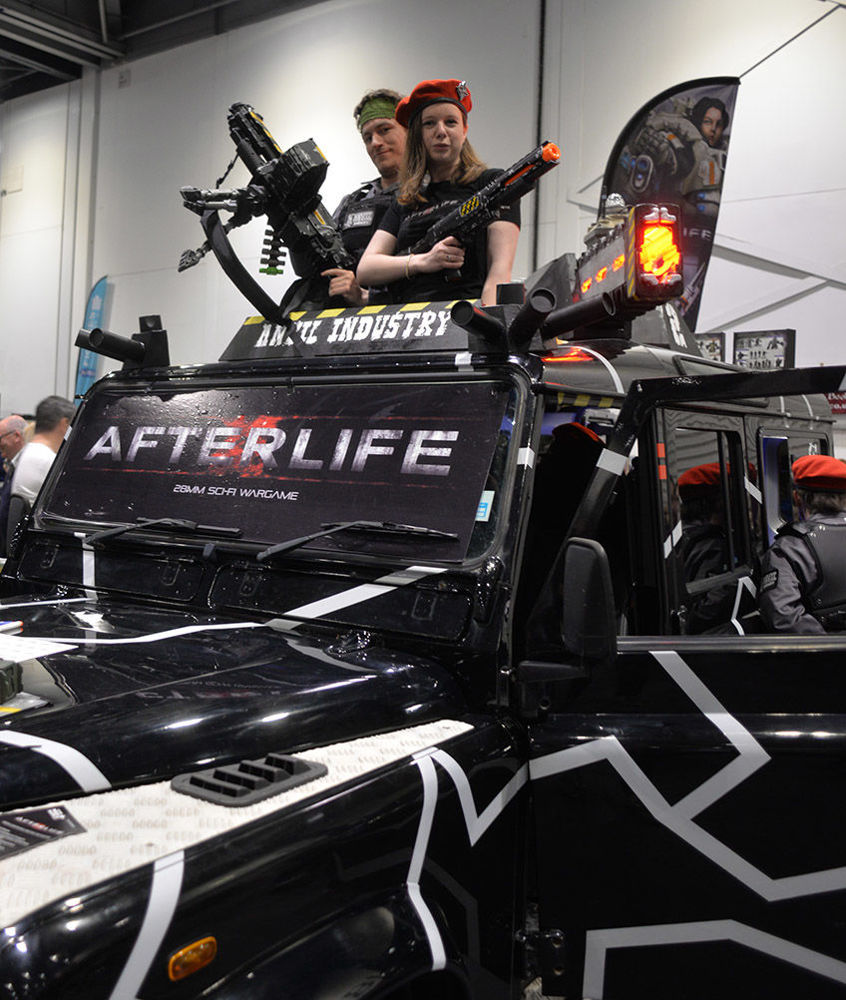 We’re not sure who had more fun on the day: us or the public, but we hope everyone who did see us enjoyed it and had a chat or participated in a game of Afterlife. Photo’s from the forward command turret (sunroof) were a popular attraction, with visitors including a Cadian, a Space Marine and even a life size Captain Nimue, the free plastic figures included in the show goody bags!

The scenario for the demo we ran was designed to cover the main mechanics of Afterlife to give a feel for the gameplay. The Republic had to infiltrate the facility, locate a control terminal to unlock the medical bay. This would also trigger an alarm alerting the Unity Council, and causing reinforcements to turn up. The attacker then needed to fight their way to the med bay and take out a VIP before they divulged sensitive information.

We had an amazing time at the show - thanks to everyone to stopped by our stand, and if you missed it, maybe see you next year, we are planning to bring a full-size aircraft carrier.

Big thanks to: Christina, Juno, Russ, Sam, Simon, Daniel, John, Sim, Gerard and Adam for your help and hard work.