The Making of the Beast - Chapter One 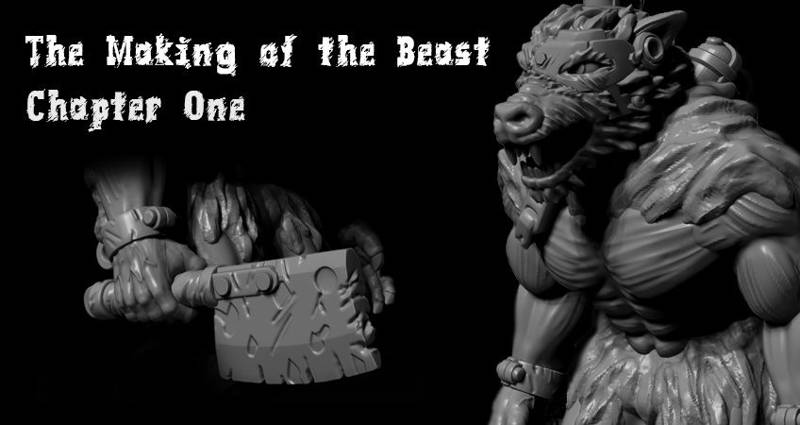 Chapter One - Sculpting the basic T-Pose

With Halloween coming up fast, we decided to make a special miniature - a terrifying Werewolf, designed to fit in a huge range of games and settings, or simply make a great painting project!

Now that we've launched our Blog, I've decided to document the entire process of creation, from the initial design sketch, through to the production mold making hundreds of high quality resin miniatures!

If you are interested in miniatures design, digital sculpting, 3D printing, resin casting, or simply want a behind the scenes look at how our figures are developed, you will hopefully find these posts informative and interesting!

At Anvil Industry, every new product starts life as a really bad pencil sketch. I use the sketch to jot down notes, ideas, rough concepts and design elements for the project, to get a better idea in my head of what I'm trying to create.

Before starting, I searched through lots of art and reference imagery online, including photos of real wolves as well as Mythical creatures. 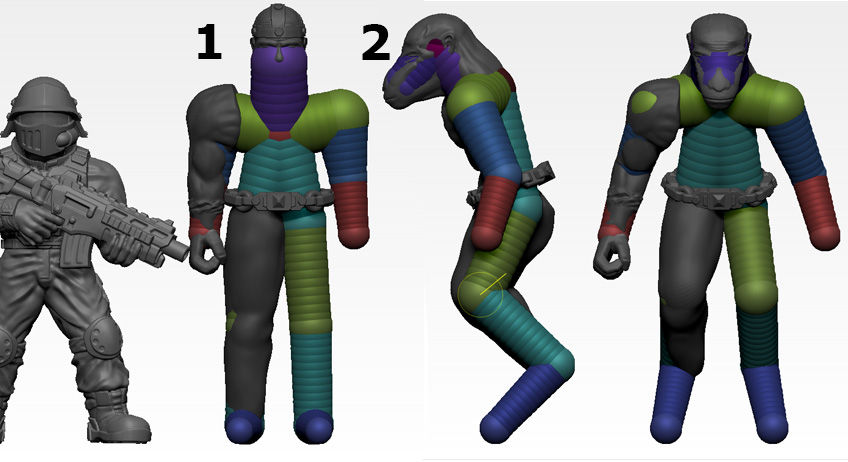 1. Every new figure starts off in ZBrush as a Zsphere Rig (the coloured circles) which act as a digital skeleton. I've added in some parts from our Blacksmith model, and included a Regiments figure to get the scale correct.

2. On the right, the Zsphere rig and parts have been modified to have Werewolf anatomy. Its larger, more hunched over, has longer arms and feet etc.  I've also stretched out the Blacksmiths head to give him Wolf proportions, which looks weird but is just a place holder. 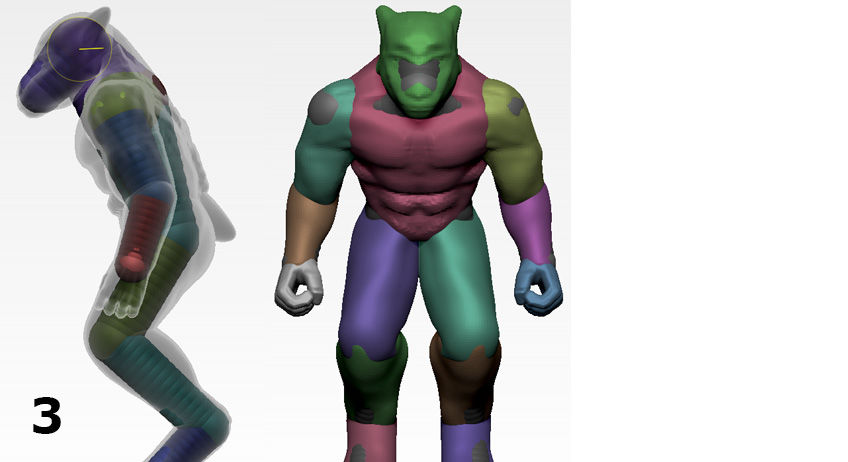 3. In this image, I have blocked in some quick and simple parts. At this stage I don't care about detail, but the overall proportions are important. Each coloured section is a separate component.

On the left, I have made the model transparent. You can see how the base parts have been sculpted to fit the Zsphere Rig. 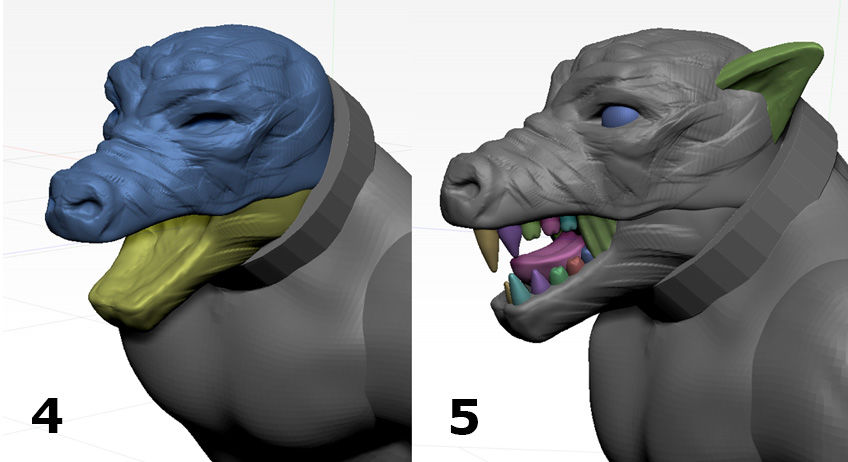 4.  On the left, I've split the head into a lower and upper section (as the top of the head will be a separate component) and added a bit more detail to the shape.

5. On the right, I've added teeth on one side, a tongue and ears. Thinks like teeth can easily be duplicated to quickly make a row of the same object, and when I am happy, they can be mirrored to make the teeth on the other side.

6. More detail is added to the base parts, defining the muscles and tendons underneath.  I use a simply "clay build up" brush to add material, which is then smoothed. 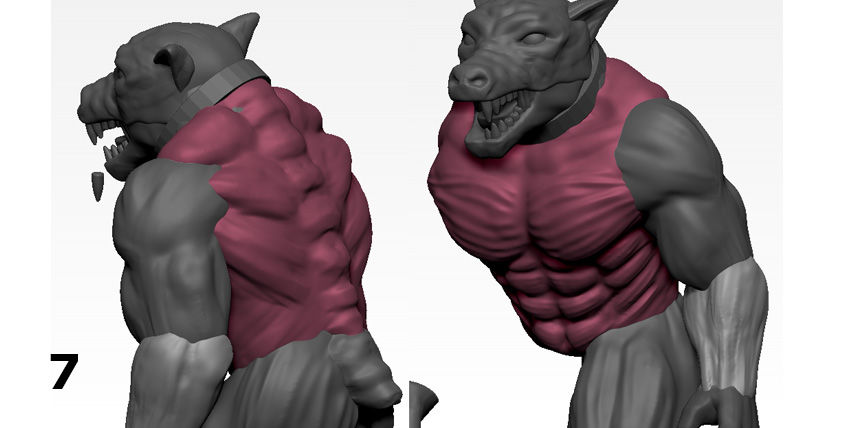 7.The same process is done for each part, here the Torso and arms have had detail added. Further detail will be added later during the posing stage (when the muscles are in their final positions)

8. I've made some Shackles. I started with simple cylinder shapes, used to build the Shackle and hinge. When it was finished I copied the component onto the ankle and resized it for the neck.

At this stage I am only working on one arm and leg - they will be mirrored later to make the other side.

9. Using Blender, free software which you can download from www.blender.org, I've made some simple tank components - these are intended as stim injectors installed by some mad scientist, and could fit well in either a sci-fi or steampunk/fantasy setting.

On the right, I've imported the basic shapes and added them to points on the Werewolf's spine.

10. To make the hands, I start with a base mesh for human hands I used for our Regiments range.

The hand is scaled up and taking one finger, I make the parts lumpier, bigger and with a nasty claw!

The finger is then copied and adjusted to make the basic Werewolf hand.

11. Here you can see all the separate parts which make up the hand have been posed and combined into a single mesh object, this allows me to smooth it out and add detail.

I've also added the claw part to the foot, and done some more detailing work on the head.

12. The Werewolf will need to have a separate right hand in order to make it cast able, so I thought I would include an optional right hand with huge cleaver! In this image, 1-4 shows the progression of the component from basic shapes through to the finished Cleaver!

13. Next we need a hand.  Taking a copy of our base Werewolf hand, I manipulate each finger individually to wrap the hand around the handle. On the right the finished hand is show, with the parts again combined into one mesh object (except for the claws). 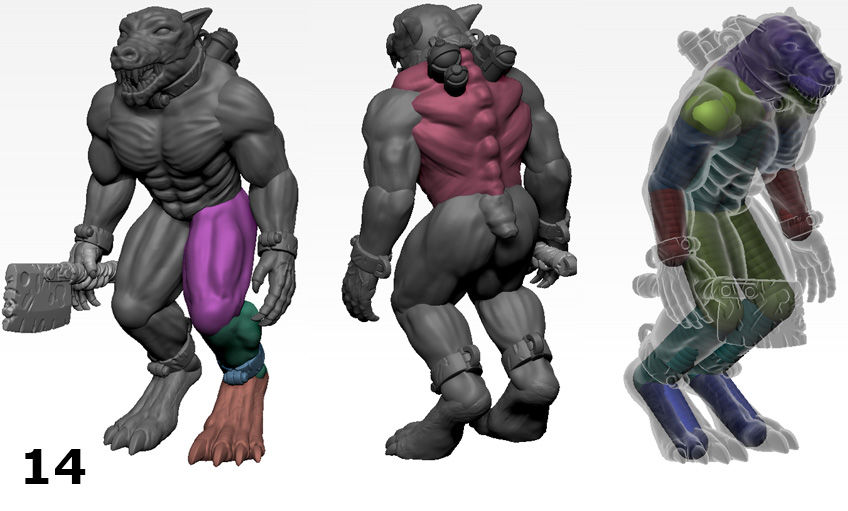 14.  Having done quite a bit of detail work, it's time to review overall progress. I check the entire sculpt regularly, checking that all the design elements fit well together and make a great looking figure, although it's looking rather naked at this stage! 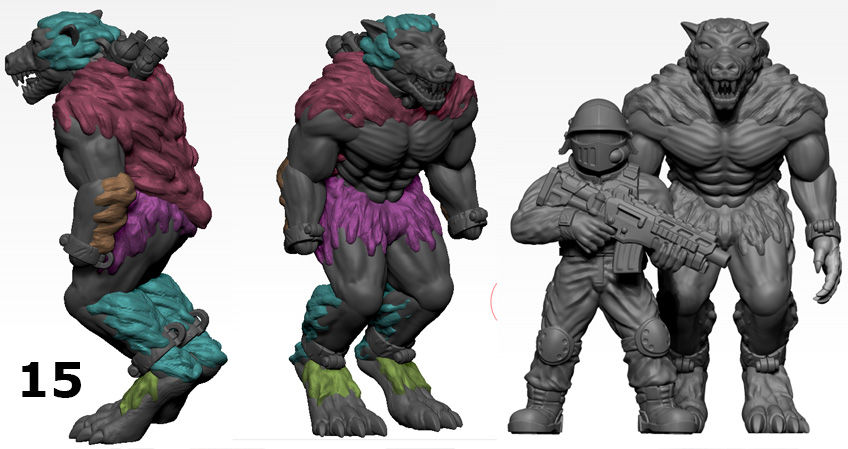 I've added the Fur sections in as separate objects. I'll do a lot of work to refine the look of the fur after I've posed the model. You can also see the Werewolf compared to a Regiments figure. He’s almost 40mm tall, which is suitably monstrous!

16. Time to add a few more details.  Here you can see I've finished off the heads. There are two separate upper head sections. It’s separate so we can cast beautiful resin teeth at such a small scale, and because it’s separate, offering a "fantasy" head and a "sci-fi" head gives gamers some great options!

I've also added some chains attached to the manacles, I imagine the Werewolf was held captive and has broken free to wreck havoc. With a special one-off miniature like this, its important to have an element of narrative story! 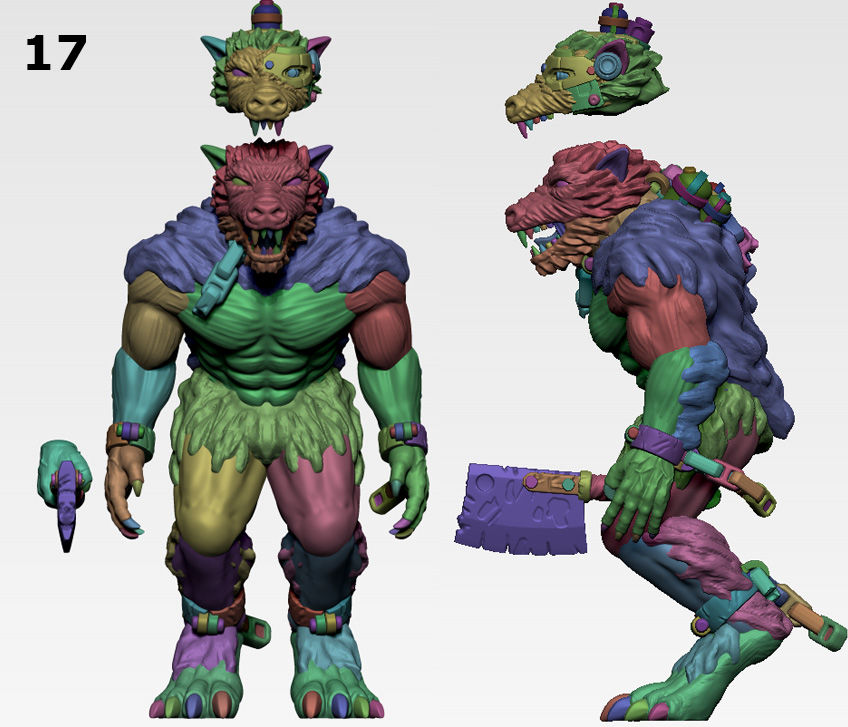 17. Here is the final model in the "T-Pose". Every single separate piece of geometry is a different colour, so you can see how many parts go into a complex model like this! 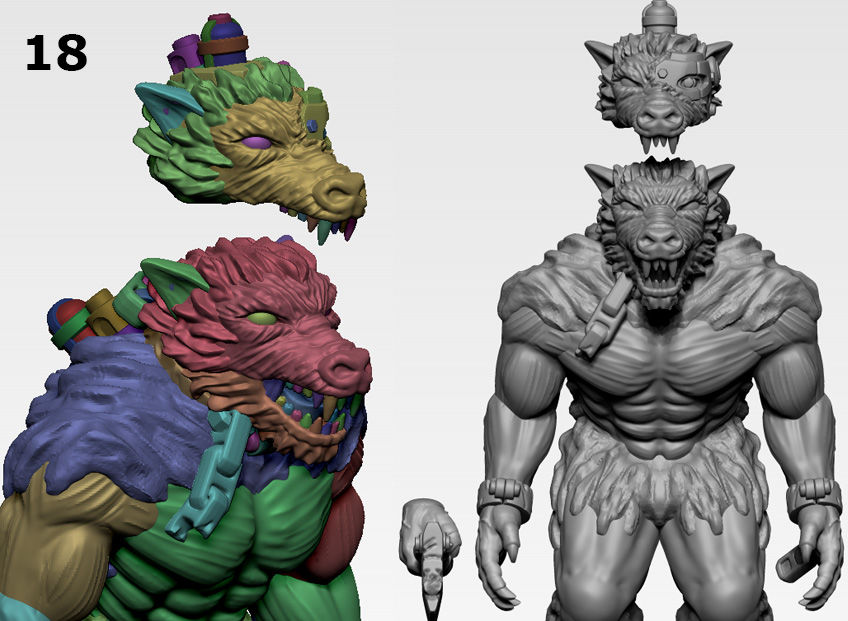 18. A close up and render in grey. The model is looking good and starting to come together nicely, but it doesn't quite have a soul yet…

The Making of the Beast : Chapter Two
Pose Sculpting, final details, and preparing the file for 3D printing!

I hope you have enjoyed this article, check back in a few days for the next instalment, and considering following our company Facebook page to get more content like this in future!